In the past, sailing in FAU university sports was in the hands of a student initiative, the Erlangen University Sailing Group (HSGE), which held and still holds its theory events on inland, coastal and deep-sea sailing in the premises of what was then the FAU Sports Centre (now the Department of Sport Science and Sport). Practice took place at Mondsee in Austria in cooperation with the local sailing school, while coastal and deep-sea sailing took place in the Adriatic Sea (now also in the North and Baltic Seas).

In the winter semester of 1994/95, the University launched a Sports Science degree – with a focus on sport for adults and the elderly – which included an introduction to the adventure and leisure sport of sailing. It was offered as a course at the sailing school in Mondsee for the first time.

Since wind and weather were unsatisfactory there and travel and accommodation were expensive, sailing training was moved to Middle Franconia the following year, where Altmühlsee Yacht Club in Muhr made its boats and rooms available in 1996 and 1997. In 1998, the training was relocated to Eolus yacht club at Small Brombach Lake. The limited financial means available on the part of the Institute for the training meant that the cooperation with the yacht clubs led to tensions and suffered from a lack of classrooms and the small number of training boats.

During this time, the expansion of Great Brombach Lake was already underway. The location in the immediate vicinity of Nuremberg and the size of the water body seemed ideal for water sports. Thus, the head of the sports centre at that time, Mr. Ernst Hecht, and the head of the degree programme and head of sailing, Mr. Reiner Sickenberg, drew up the plan for the creation of a Water Sports Centre.

In autumn 1998, the municipality of Pleinfeld was contacted, which owned a plot of land at the south-eastern end of Great Brombach Lake – in the immediate vicinity of the shore – on which the construction of a catering facility was planned. The then mayor, Mr. Otto Feil, was open to a cooperation with FAU and promised a part of the property of approx. 1,500 sqm for development.

With this promise, the Chancellor of FAU, Mr. Thomas Schöck, was presented with the idea for a Water Sports Centre owned by the University and was asked for support from the University. The Chancellor immediately recognised the historically unique opportunity for FAU to realise a project in such an attractive location and was open to the idea; he gave the go-ahead to pursue the concept further and to involve the university building authority for preliminary planning.

In the spring of 1999, several coordination meetings took place between the representatives of the sports centre, the then head and the architect of the Department of Structural Engineering 3 of the University Building Office, Mr. Hanfstingl and Ms. Ruth Marker-Diekmann, which led to an initial building concept.

In 1999, sailing was introduced by the initiative of the Universities of Erlangen and Munich by the Bavarian State Ministry of Education and Culture as a training subject throughout Bavaria for teachers at schools and – through a revision of the Degree Examination Regulations for Sports Science – for the degree programme. Since Great Brombach Lake was flooded prematurely and could therefore be used for sailing training, this training was transferred to Great Brombach Lake in 1999 to the new clubhouse of Fankonia Yacht Club in Ramsberg.

In the spring of the same year, the sports centre submitted the official application to FAU’s Executive Board for the construction of a Water Sports Centre at the harbour in Pleinfeld, and in October 1999, after the official land pledge by the municipality of Pleinfeld, FAU submitted the application to the Bavarian State Ministry of Science, Research and the Arts to support the construction project.

Various consultations and negotiations with representatives of the University Building Office (in the meantime Mr. Dieter Maußner was head of the Department of Structural Engineering 3), the Water Management Office, the municipality, the local authorities and the special purpose association led to a second construction concept. This provided for a closed structure in which the following rooms were provided on 4 levels for the sports of sailing, surfing, rowing and race kayaking:

In the year 2000, the electoral districts of Roth and Gunzenhausen were joined up and Dr. Manfred Weiß was elected as Member of State Parliament for this electoral district and appointed Minister of State for Justice. This lent fresh impetus to the project. Intensive negotiations at government and ministerial level and additional support from various selected officials led to the approval of the application by the Bavarian State Ministry in November 2001. Support also grew within the University, especially after the appointment of the new Rector, Prof. Dr. Karl-Dieter Grüske.

In 2001 we were able to carry out the sailing training independently in Pleinfeld. This was made possible by: 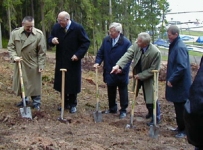 In April 2002, the ground-breaking ceremony was held by the new Rector of FAU, Prof. Dr. Karl-Dieter Grüske, the Chancellor of FAU, Mr. Thomas Schöck, the Bavarian Minister of State for Justice, Dr. Manfred Weiß, the Mayor of the municipality of Pleinfeld, Mr. Otto Feil, and the Head of the Department of Sport Science and Sport, Prof. Dr. Alfred Rütten.

Even after the re-election of the Pleinfeld municipal council, the latter, together with new mayor, Mr Josef Miehling, continued to support FAU’s “Pleinfeld Water Sports Centre” project and made it possible for FAU to purchase the site with a very low-priced offer. Since Ansbach Water Management Office also provided a site free of charge as an extension of the existing land storage berths of the special purpose association, it was possible to create land storage berths for the Water Sports Centre with the approval of the special purpose association.

Construction progressed rapidly, and the topping-out ceremony was held in October 2002. On this day, the idea of an “Association for the Promotion of Pleinfeld Water Sports Centre” was born, which was founded in 2003 under the chairmanship of the former mayor Otto Feil and had already financed the thermal solar system and kitchen furniture through donations by the time the Centre was inaugurated.

On 24 July 2003, FAU’s Pleinfeld Water Sports Centre was inaugurated with a large number of invited guests. The four-storey building is embedded in the slope and on the one hand inconspicuously adapts to the terrain. On the other hand, its 10-metre-high terrace offers an impressive view over Lake Brombach and the surrounding landscape.

This recounting of the Centre’s history is intended to commemorate and thank all the sponsors of the Water Sports Centre who contributed to its creation with their active help.