BIG – From a research project to a model of good practice

BIG „Movement as investment in health“, was an evidence-based model project of health promotion, ﬁnanced by the federal ministry of education and research. From 2005-2008, BIG investigated the promotion of physical activity among women in difficult circumstances, e.g. women with a migrant background, recipients of state transfer payments or single parents. 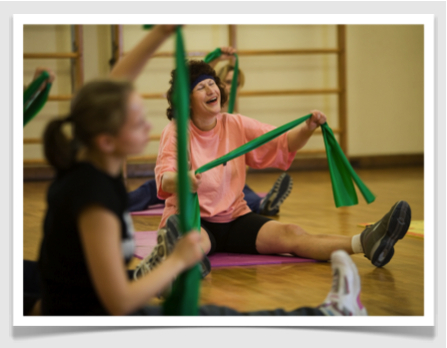 The aim was to develop innovative measures for health promotion through physical activity among this target group to improve their chances to participate in the various positive effects of physical activity by means of a preventive approach. BIG has thus been honoured in many places as a model of good practice. BIG is a case study for two WHO approaches: “Assets for Health and Development” and “Tackling Obesity by creating healthy residential environment”. BIG is also good-practice-project in the database www.gesundheitliche-chancengleichheit.de.

Building on BIG, BIGff, (2008 -2009) tested the transfer of BIG to Regensburg and to Bavarian sports clubs. In Regensburg, the project has been running independently as FIT.Regensburg since 2009.

The transfer project BIGGER (2009 – 2010) has tested the transferability of the BIG approach to other regions, on the one hand metropolitan areas such as the Bottrop/Ruhr area, on the other hand rural areas like the district of Uecker-Randow.

From 2011 to 2019 the BIG – Competence Centre at the DSS, in cooperation with BARMER, has been offering interested stakeholders from health promotion practice a broad range of services for implementing the BIG approach at new locations.

Since 2020 the BIG project has been continued and further developed with two new projects. On the one hand, the „GKV-Bündnis für Gesundheit“ (Alliance for Health) is promoting the expansion of the further developed project over a period of four years in the BIG5 project. On the other hand, the Federal Ministry of Education and Research (BMBF) is funding the follow-up examination of BIG (NU-BIG) for a period of 3.5 years. In addition to the DSS, two other institutions – the Helmholtz Center Munich and the University of Regensburg – are involved in this study.